How to deal with lockdown – a soldiers perspective 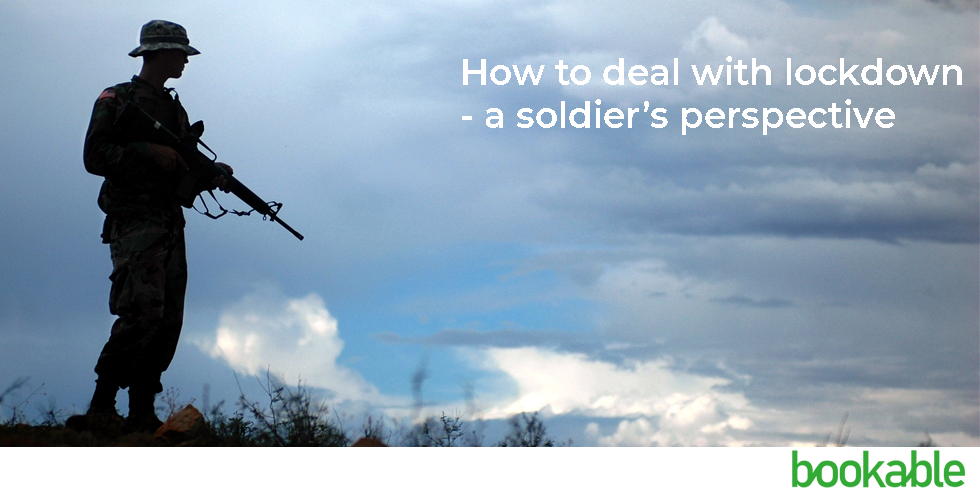 This is not a post about business, but for those of you getting tired of dealing with lockdown, I might be able to impart a unique perspective.

When I was young I did my bid for the United States. Unbeknownst to my parents and brother, who I wasn’t close to at the time, I joined the U.S. Army. It was a tough thing to do on my own. However, having grown up in the military because of my Dad – it was somewhat familiar territory. Like many soldiers, those short few years shaped me for the rest of my life. After training, we were sent on a few deployments to places we won’t talk about here. My unit saw combat at a time in the ’90s  in far-away places that didn’t make the evening news. Because of this, I have often felt more prepared to deal with the hardships of life than someone who’s never served. Those chickens came home to roost last year when Covid caused a worldwide pandemic and lockdown.

Going into lockdown, there was one thing clear as day to me. If it was going to well-and-truly be a long-term lockdown – everyone is going to experience battle fatigue. I rarely speak about my service to those whom I don’t know. As I’ve come to learn, living through a pandemic is a lot like being under siege. So here are my tips on coming out of this as a well-adjusted person.

Not everyone feels and deals the same with lockdown

On an emotional level, the pandemic is a lot like a combat situation. In a combat situation, some people fold and become a blubbering mess, most people just get on with it and don’t say much, some people really don’t care and treat it like any other day, and some thrive in it.  The same spectrum of behavior was reported on the news across almost every country throughout this last year. Some people couldn’t cope with lockdown or denied the pandemic, some people just dealt and nary a word came out, some people treated it like any other year and did the same old stuff, and some loved the chaos. It is the fog of war on a massively social scale.

Yet despite this variance in how people feel and deal with the facts on the ground, much like soldiers, everyone feels the stress. The stress of change, of inconvenience, of lost or garbled communication, and the loss of loved ones.  This especially comes out near the end of a tour, which I argue is an equally dangerous time. We’ll get to that in a moment.

Allow yourself to feel it, as soon as you feel it

Many who serve in theatre often say “embrace the suck”, because after all, combat sucks. Few would argue that the pandemic doesn’t suck. Colorful language aside, it’s actually important.  Don’t pretend its not happening, don’t ignore your feelings even though you’re plowing through the day,  Systemic conflict creates a unique circumstance where you can feel multiple strong emotions at the same time. It’s a bit like the weather in the UK or the Pacific Northwest, where you can experience all four seasons in a day. Emotionally, it is rare that civilians are used to this, except for those who live through long-term traumas or domestic abuse.

So in a metaphorical sense, when we are allowed to leave the house, make sure to pack your mask, a box of tissues, your anger management pillow, and be prepared to laugh at the nonsense of it all. Sometimes you might need them all in the very same minute.

Allow yourself to feel it all – just make sure you don’t use others as a punching bag. One of the most important things is to allow yourself a safe space to fall. Even the strongest of soldiers have a moment when they aren’t at peak performance. You have to allow yourself to have as many moments as you need so you can recoup and function at your peak again.

When lockdown ends, be prepared for the end of the watch

It’s important that you recognize that you have been in a constant state of alert for a year or more. Depending on when all of this actually ends, suddenly not feeling under seige and on alert is going to feel weird. You will act with a bit too much haste, you’ll be punchy, in a rush to get back to “life before”. Take note of yourself during this time period. Only because there is just as much emotion with the wave of relief as there is during the constant conflict.

The best example in civilian life strangely is traffic.  If you have ever been stuck in a traffic jam for 4 or more hours, you know what I mean. Once traffic begins moving again there are usually a few more minor accidents. It’s because people are in a rush to get to their intended destination.  The end of the pandemic will be much like this, so prepare yourself for it.

Don’t be afraid to reach out

I’m just a regular web developer and a former soldier making his way in the world. If you’re stuck on an emotion or in a mindset that you can’t shake loose, I always recommend speaking to someone.  Mindset apps and online courses will only get you so far. A good place to start, one of our co-founders has twenty years helping people in this manner. You can read more at her page here.