The Common Outcome of Common Sense 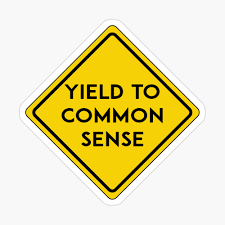 Do you make common sense your central thesis during your most critical moments in life? If you’ve ever wondered why your life is so difficult, it’s probably because you’re relying too much on common sense.

When someone injects “just use common sense” in their message, it’s when they are at their wit’s end or have no idea how to do something, to begin with. It’s when they have no proof to provide, no point to make, or direction to guide you toward achievement. I doubt you’ll ever hear a NASA scientist say “Let’s just use common sense for the next rocket launch”, or as a heart surgeon prepares, say; “I’m just using my common sense to conduct your triple bypass and reconstruct your heart valves.” Sure those roles are highly specialized and require exactness in method and communication… as does leading a country.

The reason common sense never works beyond one’s self is that its dependant on other people identifying with and accepting your beliefs, judgments, and methods of reasoning. It might get one other person to accept or share them… it’s how we find a partner in life. And divorce rates around the world indicate how difficult that is. But depending on numerous people to accept all your beliefs, judgments, and methods of reasoning when making a decision becomes exponentially difficult. Just ask any large family, never mind the population of an entire country.

The great leaders, thinkers, and innovators of the world aren’t held high because of their use of common sense at the most crucial moments in history. We as a collective don’t stand at the foot of the Lincoln Memorial or stare at the top of Nelsons Column with our hearts swelling and a patriotic tear gathering as we think “Wow, the common sense they used really saved the day.”

The only thing common sense does create is common outcomes, which often range between mediocre and tragic. Mediocrity and tragedy appear far more frequently in our world than does success. Common sense never wins the day because winning the day requires forethought, diligence, and sacrifice. None of which are common.